I find Cambridge and Boston to be 2 of the most charming cities in the U.S. The history, the architecture, the food, the accents... What's not to love??!!! So when our roommate offered up paying for gas and a hotel if we'd join him on a weekend getaway to Bean-town, we jumped at the chance!
To avoid as much traffic as possible, we took the A train to 175th St to meet K and the car and be on our way. Having never ventured above Columbia before, we were pleasantly surprised at how quiet and lovely Washington Heights was and considered moving there for a quick second before piling in the Altima and heading north. Just under 4 hours later of jamming to an all 90's rock station on Sirius, we arrived in Cambridge.
We stayed at the Royal Sonesta on the Cambridge side of the Charles River which was a nice hotel with a great hotel bar/grill called 'Dante'. Despite the late hour (1 am) we decided to have a nightcap at Dante. Here we saddled up to the bar where I was pleasanty surprised to see my new favorite brewsky, Allagash white from Portland, ME, on the menu. 3 bottles later, I was so so glad we'd decided to go on this adventure! K and K discovered the $3 Milwaukee wonder, Schlitz, and were in their own version of heaven ; ) The bartender was a friendly cat with big dreams of moving to NYC to pursue his passion for hip hop and we chatted with him until we closed down the bar. Perfect.
The next morning we got up and swam a few laps in the pool (Literally, 6 laps) then relaxed in the hot tub before heading out for the day. We went to S & S in Cambridge, Mass for breakfast based on recommendations from our bartender and we weren't disappointed! With the feel of a Jewish deli and diner combo, we felt right at home. The service was excellent and my food was incredible! I had the Eggs Oscar (rarely found on menus these days) which consists of poached eggs, asparagus and crab meat smothered in bernaise sauce perched on top of potato pancakes....MMMMMMMM! My eggs oscar, mimosa and coffee were a totally indulgent treat, perfect for a vaca!
K's friend R picked us up from S & S and we headed into Boston to check out the Boston Museum of Science. Here we went a bit overboard and bought tickets to not 1, not 2 but 3 different shows. When the day was over we'd seen "Cosmic Collisions" at the Planetarium (all of our fave), "Thrill Ride" at the IMAX and Sharks! in 3-D. In hindsight, just the starry sky of the planetarium probably would have been enough but it was fun nonetheless. The rest of the museum is what I would call "eh?" meaning, forgettable. I may be biased as we just went to the Natural History Museum and the Frick a few weeks ago...two of NYC's most impressive museums, but the BMOS held its' own.
At this point we decided to venture into the heart of Boston, Fanueil Hall. Built in 1742, this marketplace is a historical gem made up of 4 large buildings: Fanueil Hall, Quincy Market, and the North and South Markets. Read more about the rich history here. W meandered around in the 10 degree frigidity, then decided to check out Boston Commons, this city's version of Central Park.
I must say, I have a soft spot in my heart for American cities that emulate European cities.... pedestrian-friendly, historic rowhouses, classic architecture and of course, parks. Boston Commons is a magical place. We walked past the ice skaters, strolling lovers and daring sledders on our way to the famous Beacon Hill neighborhood. It is truly a beautiful park. Beacon Hill is hands down my FAVORITE neighborhood in the US. It even trumps the West Village in Manhattan which is saying a lot. Tiny cobblestone streets, impeccably maintained townhouses, cast iron lampposts, it is like something out of a movie. I fell in love instantly then determined it was fate that K and I move there immediately when I stumbled upon this street: 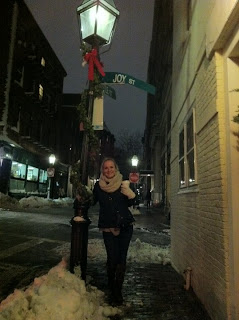 How can life not be perfect if your address is "JOY STREET"!


After our chilly walk through Boston, we ended the trip by heading back into Cambridge for some Japanese noodles at "Wagamama" in Harvard Square. WOW! Americanized? Yes. Delicious anyway? Double YES! Heaping bowls of ramen soup, brown rice, udon noodles slathered in chili oil, steamed dumlings and the best chocolate layer cake for dessert. Why can't you open in NYC, Mamawanna, I mean, Wagamama??!!!
Check them out here - it's going to be big!

All in all, our whirlwind Boston trip was the perfect last minute getaway and is now on my list of favorite cities in the USA.