One of my favorite pastimes is exploring NYC on foot. Having lived in Midtown West, the Upper West Side and now Hell's Kitchen,I'm pretty well versed in all things west of 5th Ave. But when it comes to downtown and especially the east side, I am clueless. So I decided to put my new (and fabulous!) iPhone 4 to use and I downloaded a podcast audio walking tour of the Lower East Side. If you're a New Yorker or just visiting, it is a fabulous way to get to know this city.

The tour began on Eldgridge Street. Not an easy street to find! I used my itrans app, map and compass all on my iPhone to get there! 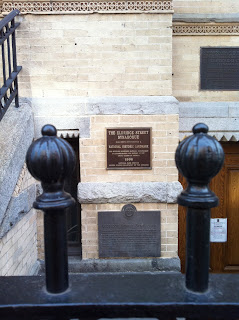 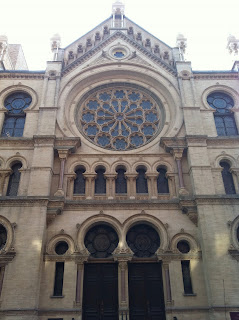 This synagogue was breathtakingly beautiful and was erected in 1887 by Eastern European Jewish immigrants. It is now a museum and still a functioning synagogue.
Across the street, Chinatown in full force! Such a perfect example of the melting pot that is the lower east side 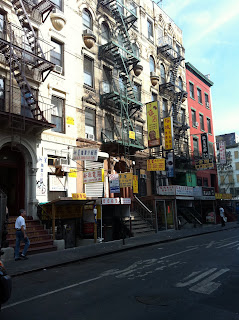 Speaking of Chinatown, just a few blocks down is 20 Orchard Street, a store-front Buddhist temple. I went in and it was a peaceful oasis complete with a temple cat : ) 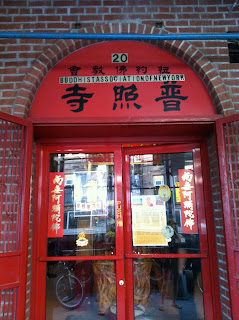 This picture truly shows the impact of the Chinese on the lower east side. Here, a hybrid example - the Chinatown fire station fittingly named the Dragon Fighters! 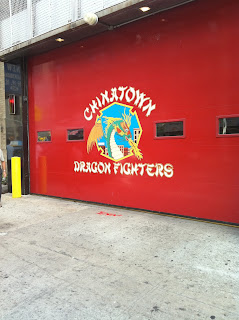 The LES is now a fashion hotspot, I snapped a few pics of trendsetters along the way. 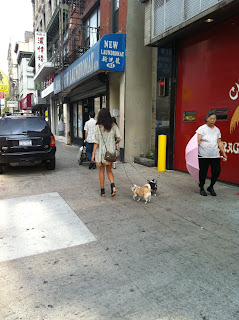 I loved this portion of the tour.
Jarmulovsky's Bank: Erected in 1895, this building was the tallest structure on the Lower East Side at the time. Founded by Sender Jarmulovsky who, literally, went from rags to riches (he began his "career" on Hester Street, selling rags from a pushcart), the bank collapsed after the pre-World War I panic, when depositors rushed to withdraw funds to help relatives in Europe.

You can see the bank name carved above the awnings. 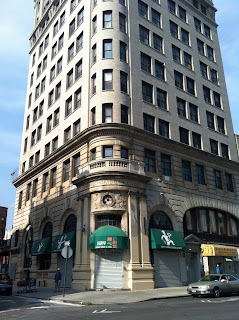 I have become an avid reader of NYC historical novels, fiction and non. Two favorites are Forever by Pete Hamill and Dreamland by Kevin Baker. If you are interested in NYC history, I strongly reccomend these books. Something I've learned through books is that during the 1800s the LES was poverty-stricken and was the US' the center for sweatshops and tenements. Buildings like these would have apartments housing 12-20 people. 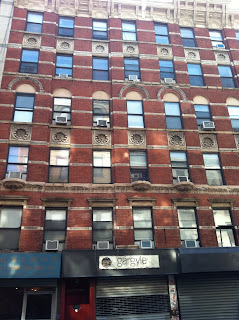 Ironic that just a few doors down in present day Manhattan, buildings like this are going up: 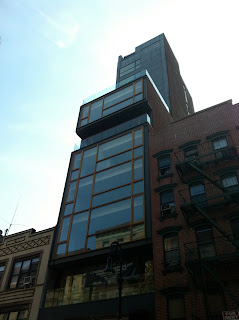 I got such a kick out of this PINK building that used to house the world's largest department store - E.S. Ridley, which closed its' doors in 1901. 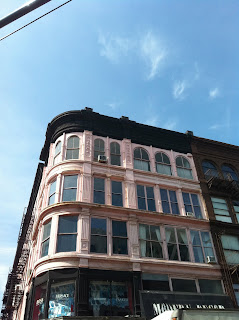 The next stop on the tour made me a little sad. I was so excited to taste the famous pickles at Gus' Pickles. Unfortunately, the podcast was slightly outdated as Gus' Pickle Shop has now "moved to Brooklyn" as a flyer said on the shuttered door. Another example of how gentrification can close so many small, family-owned businesses. 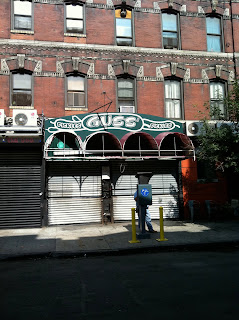 I found this club so funny. Much like many "cool" NYC clubs, they are unmarked and you have to know someone to get in. This one was confusing...with a name like "Coming Soon" I wasn't sure if it was a new place 'coming soon' and yet to open or if it truly is a club called "Coming Soon." I tried googling it to no avail. Too bad I'm not a clued-in LES hipster : ( 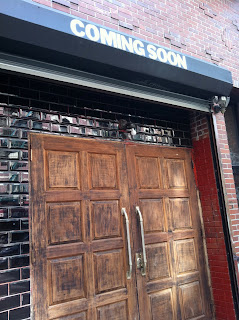 This portion of Orchard Street was quaint and charming.... 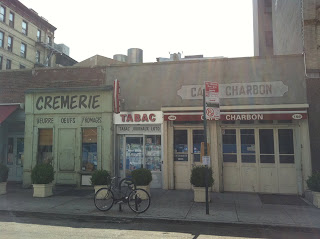 The final leg of the tour took me to the FOOD! Katz's Deli and Russ & Daughters. I feasted on a mini bagel with lox and cream cheese....delish!! 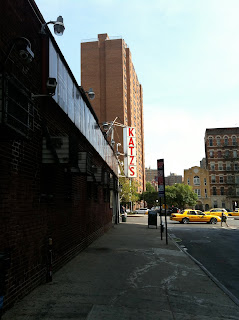 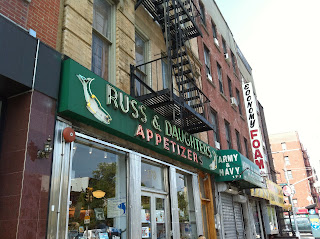 Another uber-hip pedestrian. This one was TALL, SKINNY, FASHINOABLE and.... A MOM!!!!
New York, you never stop inspiring me. 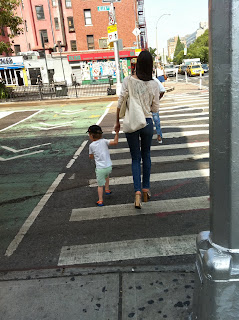 2 hours later, I felt like I truly had learned so much about the immigration and building of Manhattan's Lower East Side. I had lunch plans to meet my friend Jen at Moonstruck Diner on 38th and Madison - so I deceided to continue my walking adventure uptown.

One of my favorite things about NY is the unexpected greenery. Here, I stumbled upon Albert's Garden on Bond Street between Bowery and 2nd. 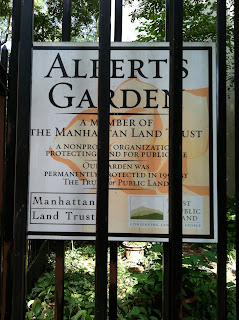 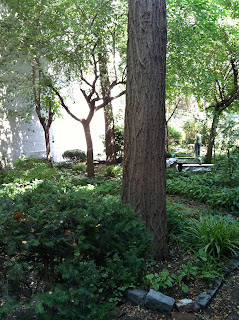 Trying out the camera on my iPhone for a self-portrait in my new straw fedora : ) 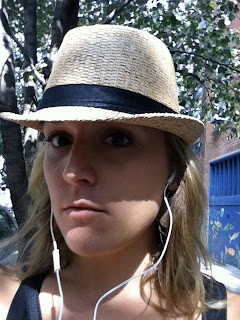 Another thing I LOVE about NY is the brownstones. I especially love ones with garage doors. This eclectic gem made me smile 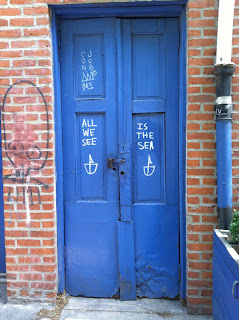 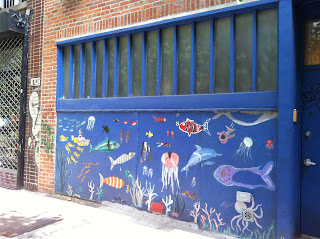 The final stop before heading to lunch was Union Square for the farmers market. I got inspired by the local produce to reward myself for such a productive day by making
a strawberry pie. 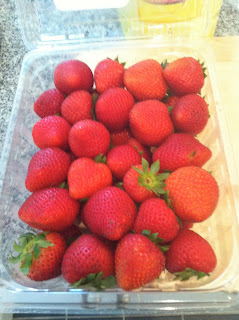 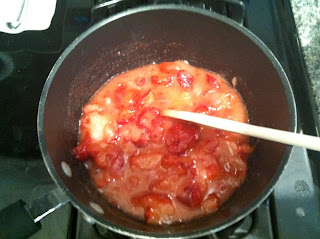 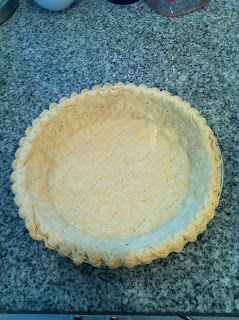 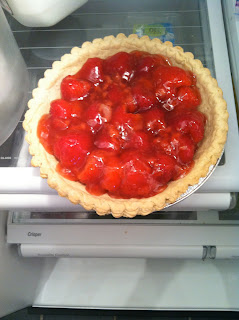